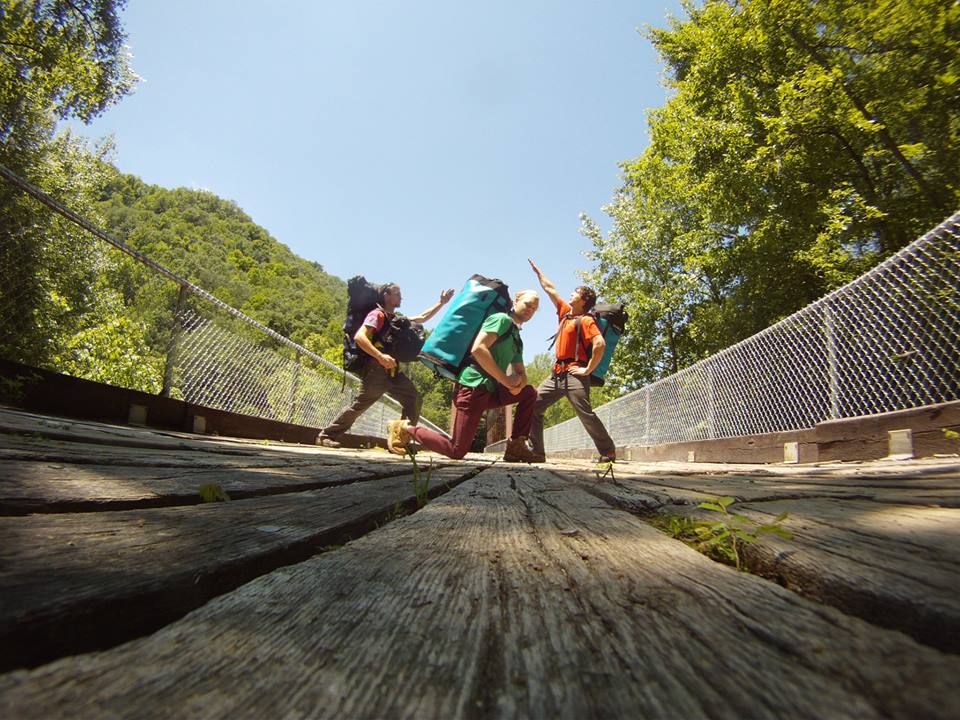 The Big South Fork River and Recreation Area may possibly be the final frontier of climbing in the Southeast. An area of incredible sandstone that stretches over 90 miles from Kentucky to Tennessee. This line of rock is home to Kentucky’s Red River Gorge and tons of unclimbed rock between the two. An area that is also the most wild and remote I have ever experienced in Tennessee. So wild in fact that on previous trips we have seen snakes every time. I even had a snake come out of a hole while leading there two trips before, on a third pitch hundreds of feet in the air. I just knew it would only be a matter of time before the snakes came out. The plan for the trip originally was to have a party on this ledge with some school mates and other climbers I knew. At the last minute it was only my team of three people, total. So with a trio-scumbag crew and a four day weekend, it was time to play.

Late in the day with fresh meat and cold beer, we camped by the car to organize gear amongst the haul bags, eat like kings, and drink like fish. Taking complete advantage of the luxury life before the wild captivates us. When we awoke the next morning and had our supremely made coffee, the boulder that shares the campsite was attracting everyone to climb. 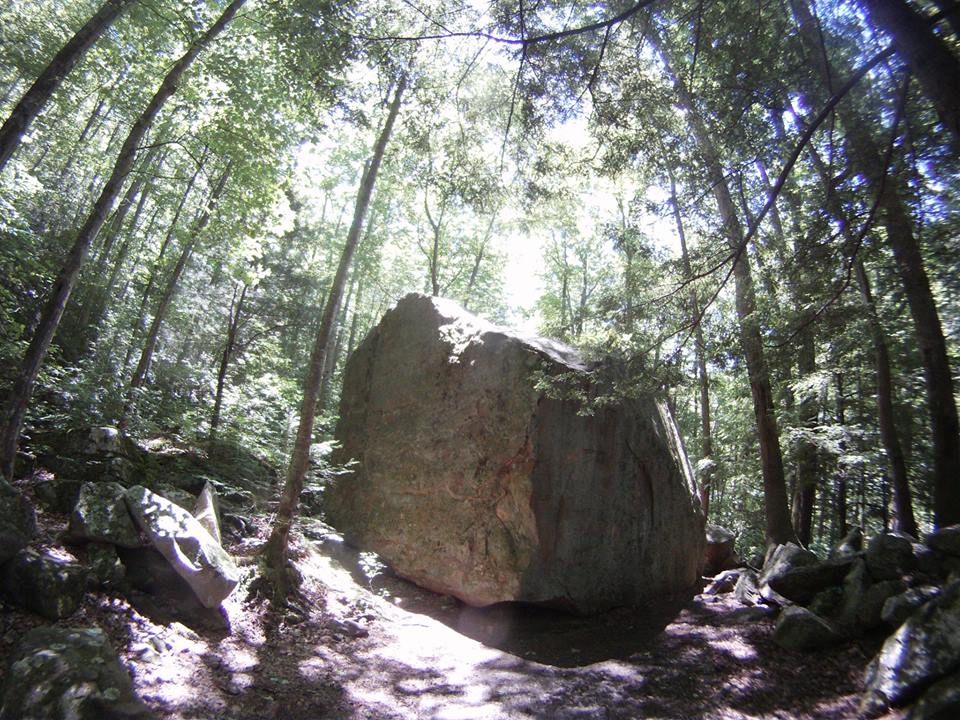 We played on that boulder until the time came for us to head up the hill and do some real climbing. Now the team seems motivated and warmed up for the hike. The bags are packed for three days and heavy as hell. There is also no trail and bushwhacking is thick. After a painful hike up to the cliff line as I sat my bag down, I notice all the snake holes coming from the Earth and I just know they are close. “Never mind with that,” I say and get the rack ready for my partner to start us off. The guidebook was left in the car and was probably the best thing that happened for the trip because now we can take our own way to the top, an opportunity for pure adventure. The first pitch we had climbed a while back and I got about 75% completed and then started get down poured on, so I left some gear to bail and surprisingly on our return everything was still there. My partner wanted to give it shot this time, and what a flawless run up that wall it was for him. He had used a double rope system in order to help with a long traverse at the top, leaving you extremely exposed with nothing but air under your feet. An amazing send to say the least. At the Big South Fork the pitches usually end up meeting a ledge of some type, with one good tree to belay and rappel down from. So he aimed to a ledge, got there, pulled the haul bags up, and then it was good for me and our other team mate to climb up. Now that all three of us are on the ledge we have lunch, and since I snuck a six pack of beer in my partners haul bag without his knowing, I bust out three for the team and we started dancing. 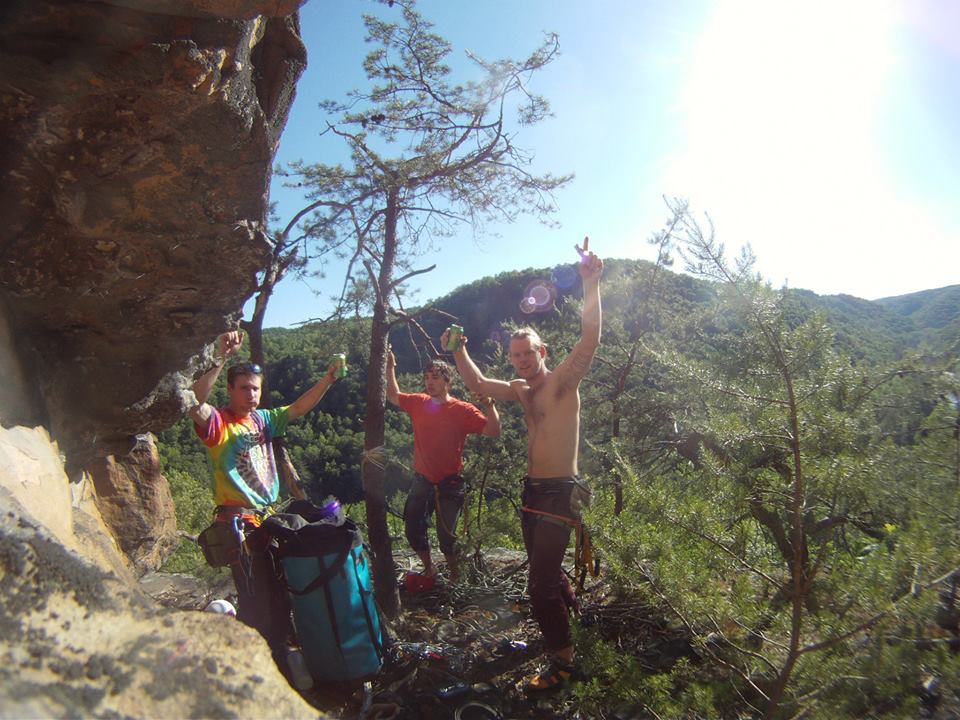 We were feeling full and refreshed so now it is my go on the second pitch. The ledge we were on met the original route of the O & W wall which has a very nice bolted anchor system, instead of a tree, and it would be greatly needed for the haul bags to make it to our future camp. On this particular route on previous trips, I have had some times, but none this good. I felt my body in tune, my gear placements were scarce but strategic. Every rock I pulled on that had a decent hole or crack, all I could think about was a snake awaiting my arrival, so I placed my hands and fingers gingerly. This style slowed me down and helped to make me more calm for some reason, but I knew the flow I was going with was the way it should be done. 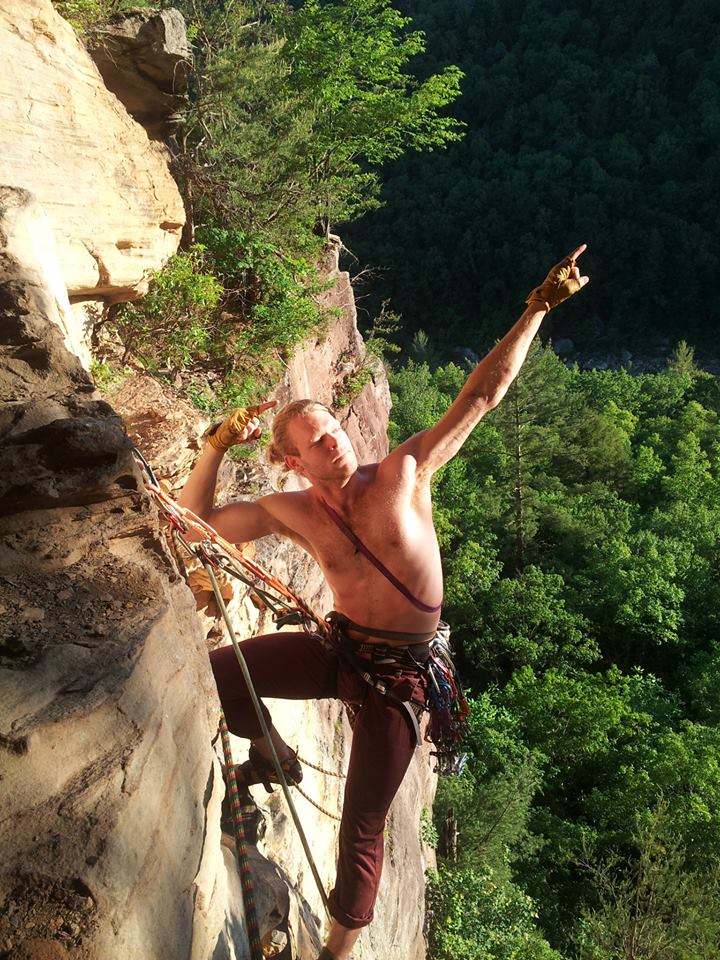 As I get to the top and reach the anchors, I belay the team and haul bags up as the sun starts to set with us facing the west, as it dips below the mountains. This means we must find a place to sleep and since we were on an adventure, trying to stay away from the familiar spots, we definitely had our hands full. My partner takes a 4th class down climb to a ledge across the way, the same ledge that the party was planned to be at. Once he gets there it is complete darkness. He set up a sketchy trad anchor with two cams in some questionable flakes and another tri-cam that seemed to hold most of the weight. I’m basically a 45 degree angle up and across from him using my gri-gri, I lower the bags into the void as he pulls them across. We had everything on a micro- traxion pulley that really doesn’t support a ton of weight and we were for sure testing the limits. This whole ordeal took close to an hour as we were anticipating something to give, but it never did and our bags were safe. The other team mate and I grabbed the last remaining gear and took ourselves down the 4th class in complete dark, only our headlamps allowing light, but we made it and on to the ledge for dinner. 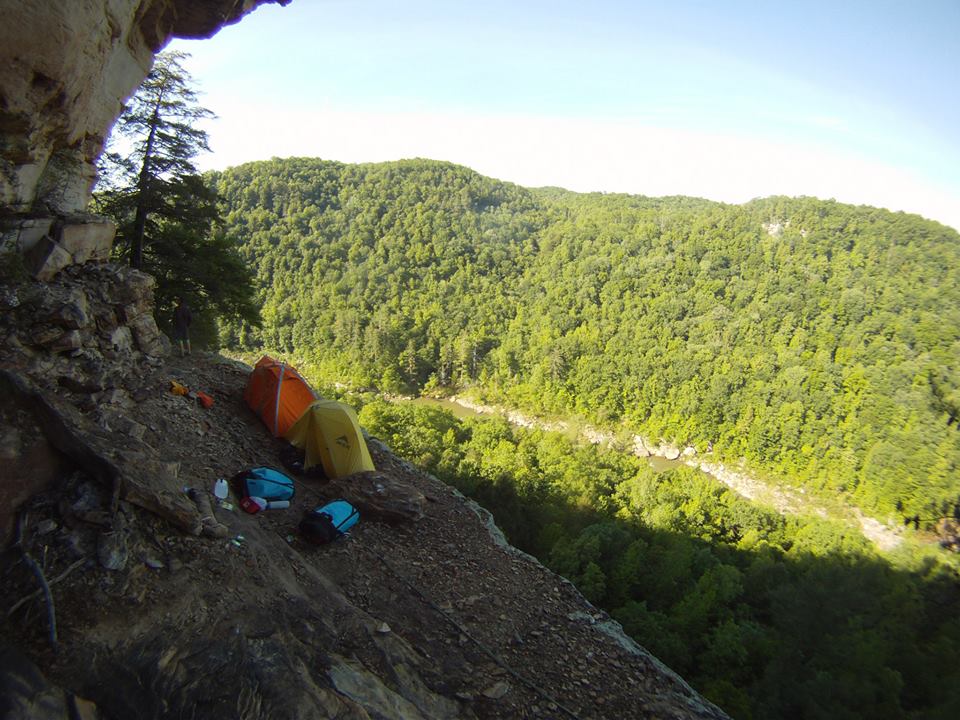 The ledge is a lot smaller than I remember, there is really no way multiple parties of teams could have camped here. The ledge looks right down on the O &W Bridge and we can see a few camp fires from the people at the base. So we set up a fire, and it lit up the entire ledge and dugout we were camping on. We just knew we were a very obvious light display amongst the dark. Little did we know a park ranger was down there going nuts about three people having a party on a ledge with a fire for the whole valley to see. We cooked a big pork loin next to the fire, had the rest of the beers, and called it a night. What a fine day that was.

The next morning we descended down to the base to fill up on water and take a swim. As we got down to the bridge we are met by a group of younger guys who thought we were crazy for having a fire up there and even more so about how we got there. Shortly after, the park ranger pulls up and wants to talk to us. At the tone of his voice I thought we were going to be in trouble for drinking beer on the ledge, especially after he said he seen us with his binoculars. Turns out he just had a problem with where we parked and the fire of course. He even told us that there was no law or rule for having a fire up there, but he just didn’t think it was ethical for nature.  He will probably try and make that a rule now, so sorry if you were trying to have a fire on any ledge in the future at Big South Fork. After he let us go and we got stocked up on water, we ascended the ropes back to the ledge for dinner. 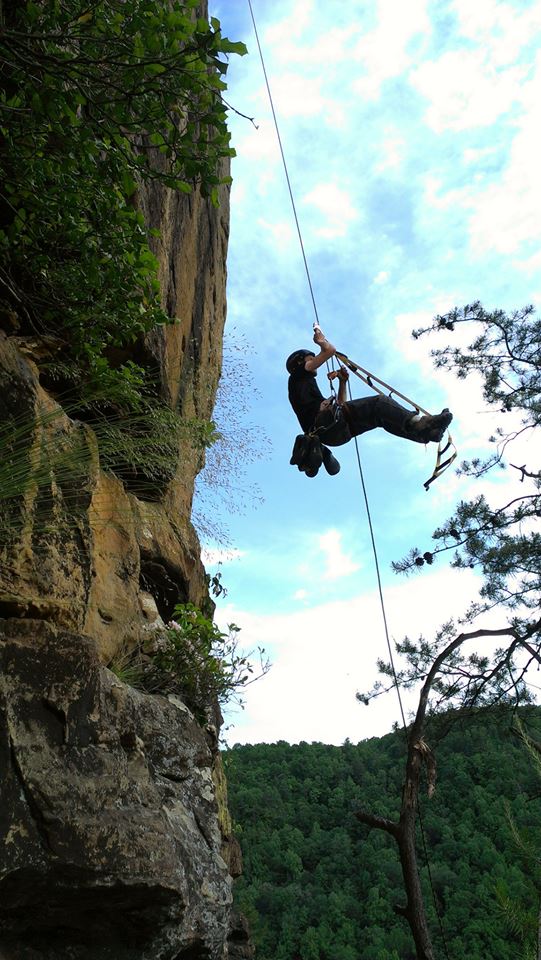 No fire this time but we had some phenomenal canned ham one of the guys brought from his house. The meal was little and big chucks of ham in a jar, and bean soup. The final morning everybody is soar as hell but we know we need to top out. We look for a few routes and my partner picks out a ledge that we can make it to just up and left of where we are at. He aids straight up a thin crack for about forty or fifty feet and traverses left to this tiny ledge and sets up a trad anchor. As I try to free climb up to the ledge I realize I am way out of my league as I go frenchie- free on cleaning up the route. I make it nonetheless and come into contact with a nice surprising splitter crack made for fist jamming and then above that is an easy climb to the top. 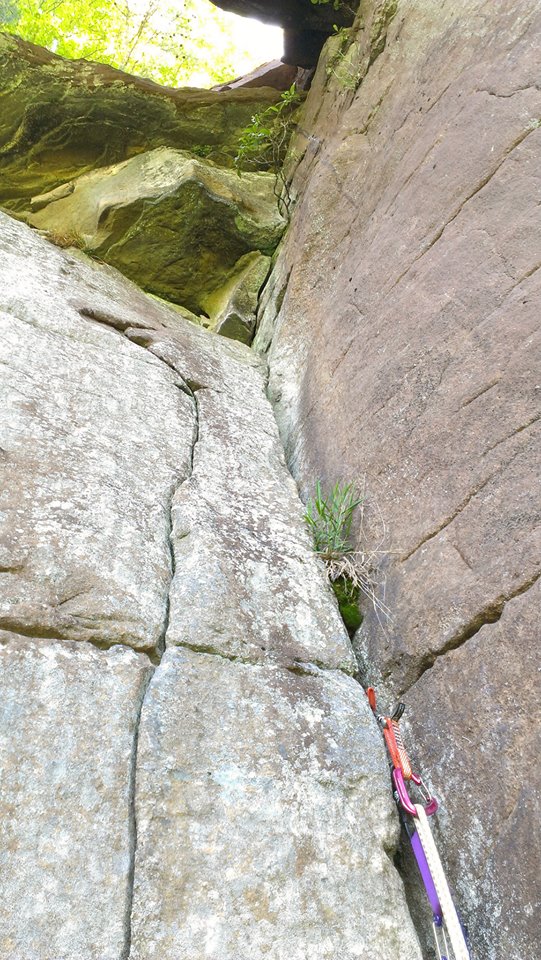 As I start plugging in gear, the biggest spiders are there to welcome me. I had to keep a cam in my mouth just to knock down the webs as I climbed up the section. As I reach this chimney section that was slim for gear I didn’t have any more, I yell down to my belayer, “I’m going solo, just feed the rope.”  I walk up the small chimney section to a blank wall I was able to mantle for the summit. I’ve been at the spot before, but this time I feel really good and excited to be here. I belay my teammates up and we soak in the greatest view Tennessee has shown me thus far. 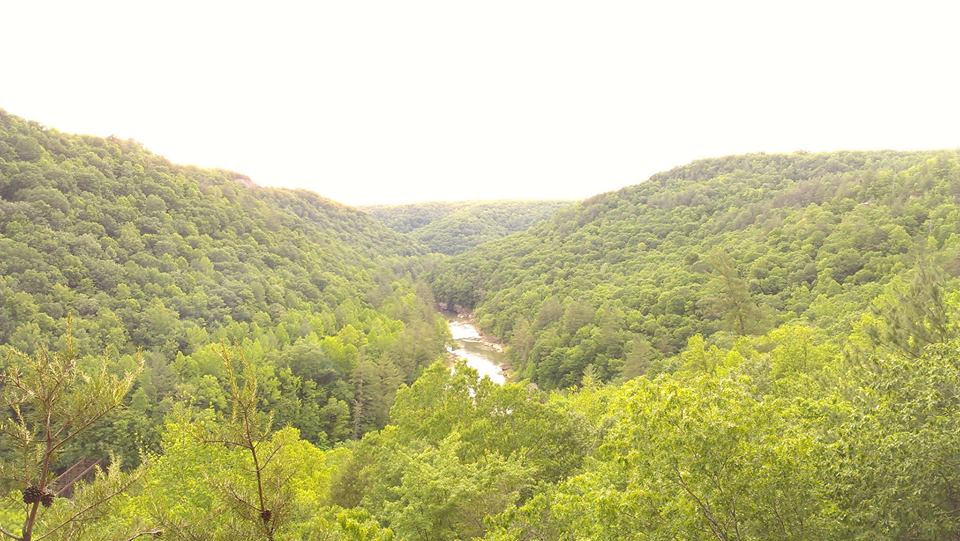 Big South Fork never disappoints and if you want a real adventure, where sport routes are slim to none and the wildlife is plentiful then Big South Fork is the place to be. I have never been without seeing a snake, but this time, the best time, I did. No snakes! I can’t believe it and neither could the team. We left with our heads held high and drove back to reality.

When the sun shines equally on both of Mother Earths’ hemispheres, chances are you can find me in North Carolina climbing on some sloped, featureless granite. Like a werewolf is to a full moon, the equinox of spring and fall seems to pull me toward a beautiful remote place in the Pisgah National Forest called… END_OF_DOCUMENT_TOKEN_TO_BE_REPLACED